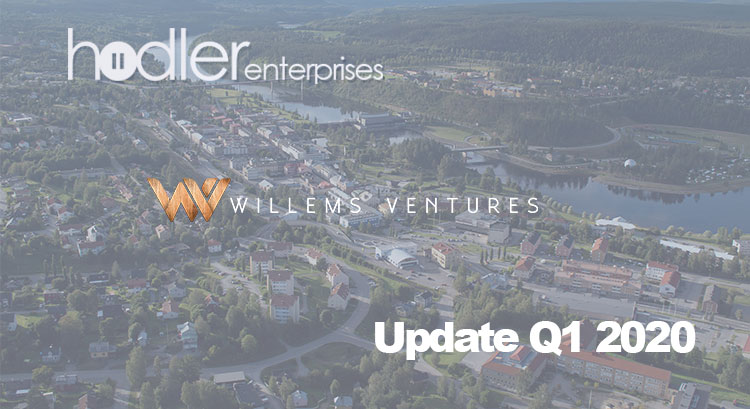 A little, quick and early Q1 update from our side.
First of all, we wish you all a happy new year.

We have been very busy the last few months, rushing on several projects and meeting up with new partners for our ventures.

During the IEO/ICO of Voyager Park, we have received the news about AMLD5.
AMLD5 is a directive, designed to battle money laundering. A lot of companies that deal with crypto had a hard time dealing with this new directive, which is about to go live on the 20th of January.
We have been also suffering from these new regulations, but as always, we turn things around and make something positive from it, just like in December 2018.

However, a few things are going to change within our company policy and unfortunately also the concept for a few projects.

The project that we were worried about the most was Altilly.
Altilly is a digital asset exchange that offers trading in digital currency, with the goal of enabling future services with fiat currency and IEO’s.

We have decided the following.

During the IEO of Voyager Park we have encountered several difficulties regarding our business in cryptocurrency. The concept of Voyager Park is that you will be receiving dividend payouts to your address that holds the tokens. This concept also allows you to freely transfer your tokens to someone else and anonymously receive dividends without revealing your real world identity.

The concept we are providing is similar to the already existing project called Hodler Energy. However, within Sweden there is a limit on the amount of money you can send to an address without declaring any information about the person. This goes both ways for digital currency, receiving and sending money.

This makes things difficult for investors that hold more than 10 tokens, since it will exceed the payout limit. To solve this issue, we have decided to sell actual shares of the Voyager Park project in the form of equity.

What does this mean for you as an existing investor within the Voyager Park project?

The good thing about having people to own shares in the company is that they are more directly involved. We all strive for the same goal and share our expertises together to reach our goals.

There are some more things that are going to change for you as an investor. All the information will be presented to you as soon as we start the migration. The tokenomics of the previous IEO with in-depth details of the project will be available for all invested participants.

Trying to be taken seriously with the name Hodler Enterprises while dealing in cryptocurrency makes our business (unfortunately) look shady, even after 2 years.
We had the chance to participate and become the developers of the Swedish eKrona.
However, the Swedish Riksbank decided to continue with Accenture on the development of the eKrona. We believe the way we represent our company and the name of our company had some effect on this decision.

We have decided to split projects into 2 categories and with several business entities.
Hodler Enterprises (for digital currency related projects) https://hodler.enterprises
Willems Ventures (for real estate and b2b/b2c projects) https://willems.ventures

The following diagram will show you the new company structure. 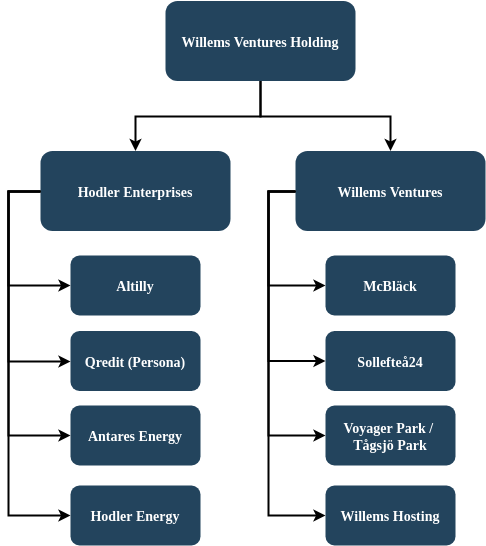 While the Swedish Riksbank did not go forward with our proposal, we will still be moving forward with the stable coin on the Qredit blockchain. The concept for our stable coin isn’t like any other stable currency. It offers unique, advanced and centralized features which you’ve never seen before on a decentralized blockchain. The concept will be available to the public in February 2020.
Together with the exchange and banking license, we will finally be releasing our own stable currency which will most likely be connected to the Chinese RMB as the underlying asset.

In the last quarter, we have released the first stage of QAE Smart Contracts.
Since then, fifty new QAE tokens have been created. We have received several requests on features that should be implemented with QAE-2.

Features such as, staking, freezing assets, adding solidity language, data registration and a lot more has been requested. We have been listening to you guys and are adding amazing features to QAE-2, which will be released in February 2020.
QAE-2 will be implemented as a plugin in our core blockchain and it will be fully open source with a wide variation of API’s and documentation available for developers and enterprises. We have been spending less time in actively participating in the community channels, but we are sure that you will forgive us after the release of QAE-2 🙂

We have acquired Persona earlier in 2019 to follow up on our advanced KYC features on the Qredit Blockchain. Persona has been migrated from the old native blockchain to a QAE token on the Qredit Blockchain. Persona will allow anyone to verify their cryptocurrency address with real world data, making it easier for 3rd parties to deal with a person that uses cryptocurrency. Think about banks, exchanges, brokers and even investment firms or projects that handle dividends, such as our Voyager Park project.

More details on Persona will be available later this year, after the release of our stablecoin concept.

We hope that we have informed you enough about what we have been working on for the last few weeks, our team is doing an outstanding job and I hope you guys know that we are still here for you guys. A longer update will be available later this quarter of the year.

Especially regarding Voyager Park, McBläck, Sollefteå24, Hodler Energy and the development on Qredit, all of these projects will have a seperate post with in-depth details of the development.

One of the things that I want to mention in this update which will sound a bit personal. I had several Skype meetings in the last few months with potential partners, companies, investors and community members. One of the questions that have been asked the most is if we see any difficulties in our plans. This question has been going through my head for a few months. The answer to this question has always been the same, that we at Hodler Enterprises and Willems Ventures don’t see any difficulties, which sounds strange, since we are dealing with difficulties all the time since the start of our company.

Whether it’s something with official agencies, new regulations, banks, change in demand in the world of technology, real estate or even printer manufacturers blocking patented ink-cartridges. We deal with everything that comes on our path, we enjoy doing it and we hope that you will too.

There is more to come! 🙂

Please drop by in one of our telegram channels if you have any questions.