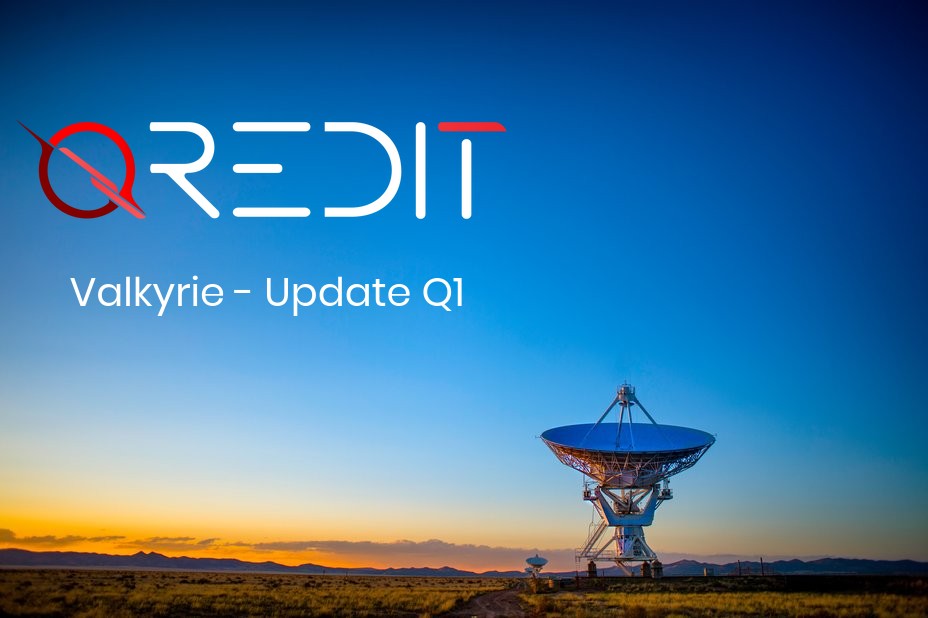 It has been a while since we have released the last update about Qredit Valkyrie.

The initial use-case of Valkyrie was mainly to deploy and host blockchains and be a guide for new projects entering the blockchain space.
Ark Ecosystem, the project our chain is forked from is focusing on deploying bridgechains and they are focusing more and more on guiding new projects.
For this reason, we have decided not to compete with Ark especially since this is their unique selling point and we respect that and will do our best to see if there is any mutual benefit where we can provide hosting solutions in a later stage.

However, the Valkyrie program is going to continue but in a slightly different way.

We will be focusing on the blockchain space. Literally.

Back in the Q2 update of 2019, we have mentioned deploying nodes in orbit for various reasons and use-cases.
We had some pilot phases and node deployments using high altitude weather balloons in 2019.
We have learned a lot from these pilot phases and are now taking things a step further.

In March 2020 (exact date: TBA), we will be deploying a new weather balloon most likely from the airport in Sollefteå/Kramfors in Sweden, with upgraded hardware,navigation and communication tools.
These tools will be integrated as a plugin in the Qredit Desktop App, the tools will be made available open-source later in 2020.

What are we trying to achieve?

While our first intention was ‘only’ to host blockchains in space using radio-communication and showcase a concept to make blockchain available for everyone in the world even without internet or in regions where censorship is the status quo.
We are now adding new features that could benefit anyone in the satellite industry and researchers, scientists or enthusiasts on Earth.

A lot of scientific-related satellites are not being used to their full capacity.
Data that is being transmitted is currently cost intensive and available to a selected group of people.
Some of the data is even being requested more than twice by multiple ground stations and only stored in centralized databases, which makes it even more cost-intensive and less efficient.

Example:
Currently about 10 taxi’s are being used to transport 10 people to the same location.
For each taxi you need to make a call, book a specific time and date and individually pay for all 10 taxi’s.

Valkyrie aims to solve this by making a bus publicly available that enters the bus-stop every day at the any time and date going to the same destination with only a fraction of the price  compared to 10 taxi’s.

Example:
Commands to a satellite can be made to work on several authorized levels for one or multiple addresses.
If you would like to analyze or research a specific geographic region, you can make your request to a satellite provider on the Qredit blockchain and optionally request to store the data on the blockchain or send it directly to your email, fully automated.
Data stored on the blockchain allows anyone to access the data without requesting it once again.
Satellite providers or universities that deploy their CubeSats are able to monetize these automated requests.

Requests can be configured based on prioritization or access on different authorization levels.
Meaning that you can also allow specific groups, agencies, universities or companies to make specific requests or completely disable requests made by a private user.

We have been silently developing a brand-new tool and communication protocol named the ‘Qredit Secure Communication Protocol (Q-SCP)’.
Occasionally, you might see some transactions on the block explorer with some ‘strange’ data in the smartbridge field.
Our first publicly available working prototype is currently being tested on virtual private servers and on our own relay nodes.
We will be providing a software within the next 2 months for our delegates or any node operator to run on their servers. Even you will be able to test this software at an early stage.
This software is a working demonstration and a small part of the communication protocol that we will be using for our satellites.
This software will allow you to execute commands or request data from any server without logging in to your server using the traditional SSH method and view responses from the server directly on a specific address on the Blockchain.

We already managed to deploy an Ark node on a server by using another Blockchain without logging in to the server.
This hardens the security of the VPS and all other ports except of the P2P and API ports can even be closed or blocked entirely.
The software also allows you to grant (limited) access to your server to another user or multiple users on the Blockchain.

We aim to release more data about the working prototypes with a test report after the deployment of the weather balloon in March.

Speaking about satellites and launching objects in to orbit. How are we going to fund this?
Our team is currently in negotiation with several Venture Capitalists that are going to fund this operation, in return they will be receiving equity in the business.
Our second source of income to fund this operation is to offer ridesharing for other Blockchains projects.
The hardware for our satellite deployment will be fitted in a 12U case and the launch will be organized by Spaceflight.com.
The 12U case allows us to fit multiple devices and receivers within a single satellite deployment.
Blockchain projects such as ARK, EOS, Tron or Ethereum can ride with us and host their node in orbit, optionally use the Qredit blockchain to reduce costs on communication back to Earth.
Blockchain projects that are interested in this venture can contact us through our website.

The next step is to find more partners, agencies or universities that are willing to join this venture and modify their satellite to communicate, listen and accept requests made on the Qredit Blockchain.
We already have 4 partners that are joining this venture, all of them providing their own expertise on the project.
More information about this will be made available later this year according to our roadmap.

This is all for now.

You can imagine that there is more in the pipeline and that only a small part of the news is being shared with the community.
Due to patents and NDA’s being signed, we are not able to release more information regarding the Valkyrie program at this time, but still wanted to give you a small update.

So stay tuned! There is more coming 🙂